Αρχική English A letter of his Eminence the Metropolitan of Morphou Neophytos to Mr....
Facebook
Twitter
WhatsApp
Email
Τυπώνω
Viber

A letter of his Eminence the Metropolitan of Morphou Neophytos to the American Mr. Philoumenos (Justin Williams).

On the occasion of the feast-day of the new hieromartyr Philoumenos the Cypriot, we publish below a letter by his Eminence the Metropolitan of Morphou Neophytos to an American, newly converted to the Orthodox Faith, Mr. Justin Williams, who at the Holy Baptism received the name Philoumenos. The present letter consists an answer to a letter of the aforesaid Philoumenos addressed to Metropolitan, whereby he was asking to write him briefly (in English) about saint Philoumenos life and point out the main characteristics of his holy person.

It is with much pleasure that we received and read your kind letter to us, dt. 26.06.2015. Once again, we have ascertained that in Orthodoxy earthen distances shorten and heavens join earth. All these wonders take place because the Trinitarian God transmits His Holiness to His saints, and by means of His saints we rejoice the participation to the Holy Spirit.

The life of st. Philoumenos can be discerned in three stages.

a. His first 15 years: They include his birth, his christian upbringing in Nicosia by his faithful parents George and Magdalene and mainly by his grandmother Loxandra (Alexandra), first teacher to him of the Cypriot popular piety. Following, together with his twin brother, the future fr. Elpidius, still young children, they enter Stavrovouni,  a Monastery of Athonite tradition, placed in the middle of southeastern Cyprus. There, the soul of young Sophokles receives the first spiritual “varnish”, which would never fade…

b. Afterwards, for health reasons, he departs with his brother Alexander for the Holy Land of Palestine and they become Agiotaphites (a greek word, derived from agios+Taphos=Holy Sepulchure, that is, members of the Greek Orthodox Christian Brotherhood of the Holy Land). Here, fr. Philoumenos runs the second part of his life. The special points of the life of the saint as an Agiotaphites were his love to the holy Pilgrimages, his obedience to the Patriarch and the rest members of the Holy Land Brotherhood -who sent him to serve even in dangerous spots-, austerity in following Orthodox Faith and Tradition. In his personal life he was characterized by a meticulous and with precision commission of the everyday Holy Services, usually performed by himself alone and which he would never neglect or abandon for another task. The other Agiotaphites call him Ptohoprodromos (poor Prodromos, after the name of a medieval writer), as they thus expressed his voluntary poverty, his humiliation, his latency and repulsion to advancement to higher ecclesiastical ranks. He remained as the last of the members of the Brotherhood. But, at the same time, this hidden treasure of the Holy Spirit performed very often the Divine Liturgy, he studied continuously the works of the Holy Fathers, the Pentateuch (the first 5 books of the Old Testament) in the original Hebrew language, and served his arabic-speaking parish in arabic. He abominates the reconciliations of the Orthodox with Roman-Catholics and Protestants, still he remains within the Holy Land Brotherhood without zelotism and extremities.

c. The third stage of his life and quite determiningwas his preparation for the martyrdom. Being a hieromonk with a precision in his monastic life and a deep feeling of repentance, when the then Patriarch of Jerusalem commands him to go and serve at the Pilgrimage of Jacob’s Well, an actually very dangerous place for his life, he obeys willingly, saying the prophetical words: «I will stay there, and perhaps a martyrdom will offer me the salvation.» And indeed, in 1979, on the 29th of November, being his name day, while he was performing the Service of the Vespers wearing his “epitrachelion”, he was tortured and slaughtered by phanatic Zionists.

From here and then, dear brother, commences the 4th phase of st. Philoumenos life: The eternal life of sanctity! He works miracles, both during his entombment and his exhumation and -of course- afterwards, his body remains partially incorrupt and supernaturally scenting and becomes beloved by all the Orthodox, as the first-martyr who resisted to the New Age and to the New World Order.

God has blessed us to transfer his holy relic from Jerusalem to the place of his martyrdom in Nabluss and repose it by Jacob’s Well and perform the Inauguration Service of the first chapel devoted to his name.

God willing, we are preparing to erect a large church in his name by the Monastery of Saint Nicholaos in Orounta village. Orounta, as you may know, is the village the parents of st. Philoumenos were residing, and where his parental house is still preserved.

I wish that st. hieromartyr Philoumenos finds the ways to help you come to Cyprus, where we shall offer you hospitality at the blessed village of st. Philoumenos, placed within the area of  Morphou Bishopric.

With our cordial blessings
+ Neophytos, Bishop of Morphou
Evrychou village, 20.07.2015. 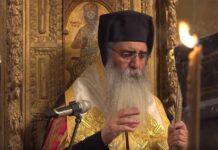 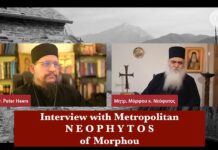